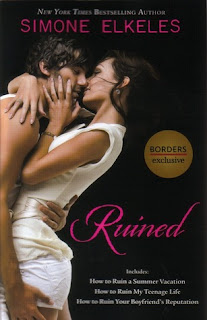 Oooff, this was definitely another book where I adored the guy(s) in this book but pretty much despised the girl, Amy. It’s to the point that I’m seriously contemplating about the intelligence of the guy(s) and if they’re mostly just thinking with their smaller head or at all. Because I can’t comprehend the fact that this seemingly smart and resourceful guy, Avi, can be with a bimbo who is not only dumb but also extremely shallow and materialistic. I just can’t understand that relationship.

However, I still found the book, or books, since this was technically three books into one, to be highly entertaining. Even though for most of the book, I basically gave Amy’s character hard eye rolls, I can’t deny the fact that she is hilarious (honestly, there were so many one liners from her that got me cracking) and somewhat caring. The somewhat part is because she was definitely not caring for her father until the second book and then she became extremely protective of him to find himself a new wife.

My biggest issue with her was the fact that she was so judgmental to the point that she was just plain rude and condescending even though they literally just met. If it was just random strangers, I probably wouldn’t mind as much but these were her family members. Granted, she never met them before and they didn’t even know about her but still. Family is still family and the way how she treated them in the beginning just exemplified why people think Americans are spoiled.

One thing I did enjoy actually was the way how being Jewish was portrayed - as both a religion and as an ethnic identity.  I thought it was very well done and enjoyed the depiction of the history and the struggles that Jewish people faced.

Overall, I still enjoyed the series and while I didn’t like Amy at all, I found the romance between her and Avi to be steaming and very passionate. I just wish that she wasn’t as spoiled, judgmental and dumb so she could be a better fit for Avi.

LET'S CHAT!  DO YOU ENJOY BOOKS THAT TOUCH UPON RELIGION?  LET ME KNOW