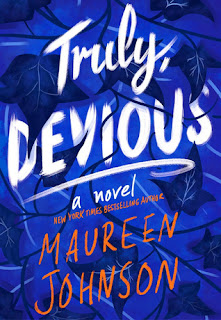 I’m mainly deducting one star because the ending was pretty disappointing. For some reason, I thought that the first book would be about this cold case and by the end, Stevie would solve the case. Then in the second book, the sequel, I thought there would be another case for her to solve. Apparently that wasn’t the case at all. Instead, there was another mystery that happened while she was in school and that was the case that she solved. This meant that the cold case from ages ago is still unsolved and I just feel so disappointed because I was so invested in figuring out what had happened. And that cliffhanger at the ending!! It was just the worst so that being said, I will definitely need to pick up the sequel.

Anyways, despite my disappointment with the fact that the murder mystery was not solved by the end of the book, I still really enjoyed myself. The character, Stevie, was likable albeit a bit odd at times. She was incredibly smart which I appreciated – I hate when characters are dumb and that clearly wasn’t the case here. I also found it partly amusing and partly annoying that she would have these “quirks” mainly because she saw or read other famous detectives having the same quirk. It just made her seem unoriginal at times.

The romance was definitely an aspect that I actually could have done without. It wasn’t that it was bad or anything but I just felt that the author just teased it but didn’t really develop it. There were times when it was much relevant to the story and the characters but then just as quickly, the author turned it off and I just left slightly confused. It was as if the author introduced the romance just enough to be like oh hey here’s some romance but not enough to actually have a romance. It was just kind of odd to me. That being said, if the author developed the romance a lot more in the sequels, I would not be mad.

Now that I think about it, why did I give this book four stars? LOL it seems that a lot of what I had written were negative but somehow I still really enjoyed the book?? And I am still very intrigued and invested with the story – enough for me to actually go and purchase the sequel. I guess it’s the mystery element that is keeping me very engaged and entertained despite some of the other flaws in the book.