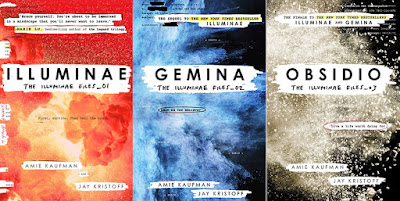 So I’m not entirely sure why my 2016 self gave Illuminae 3 stars because I freaking loved the series. The only possible reason is the way how I read it this time around. Last time, I read it in physical format and I had mentioned in my earlier review that I didn’t feel connected with the characters. However, this time around, I listened to the series on audiobook while also picking up the ebook and I think that gave the characters so much more depth and perspective. The audiobook also had a full cast so that definitely helped bring each character to life for me.

Out of the three main couples that were introduced (one in every book), I liked the first two couples best – Kady and Ezra and Hanna and Nik. For me, the best part of the series were just how strong and important the females played a role in the series. Kady is a computer genius and she pretty much single-handedly went one-to-one with an AI to save her ship. Hanna is amazing with tactical and fighting and there were so many times in the second book when she was outnumbered and outgunned yet she managed to utilize her martial arts skills to get her out of sticky situations. Both of them played such pivotal roles and I loved how smart and resourceful the two of them were.

As for the two guys, Ezra and Nik, I honestly think they were there more for eye candy LOL and motivation for the girls rather than anything. I mean, they also played major roles but definitely not the extent of the two girls.

The one downside in terms of the characters was that I thought that the last couple, Asha and Rhys, were not as developed as the others. I think this was partly due to the fact that the last book also included Kady/Ezra/Hanna/Nik a lot more than the previous two books. So because of that, I didn’t think Asha and Rhys were front and center.

The format of how the books were written was also incredibly fascinating and why I also think that the audiobook is the way to go because there were a number of pages that included tiny font in spirals and whatnot that I honestly might have skipped if it wasn’t for the fact that the narrator included all those content. And I think that those pages would have also provided more character context and plot development that I would have otherwise missed.

Overall, I absolutely adored the series and highly recommend them especially in audiobooks. That full cast was really key to the character developments and entertainment factor. While the plot was relatively straightforward, I did really like the plot twists as well as AIDAN’s constant interference. If you’re looking for a uniquely formatted book with amazing characters set in outer space then I highly suggest checking these out.

LET'S CHAT!  ARE YOU A FAN OF SCI-FI NOVELS?  WHAT DO YOU THINK OF A SENTIENT AI?  LET ME KNOW