So excited to share today's post featuring Yoon Ha Lee, author of Dragon Pearl, a sci-fi adventure about a girl with fox-magic who stows away on a battle cruiser and impersonates a cadet in order to solve the mystery of what happened to her older brother in the Thousand World Space Forces.  Honestly, how good does this book sound? 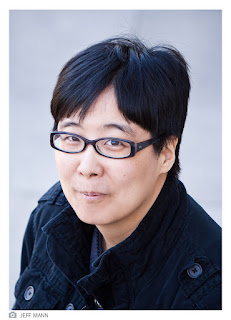 Interview
What made you start writing?
When I was in 3rd grade, I had an inspirational teacher named Mr. McCracken. He introduced the class to creative writing by dressing up as a superhero called Story Man, complete with costume. (I wonder now where he obtained it!) Before then, I'd been a big reader but I had this vague notion that books magically grew on trees and fell out of the sky into libraries. It hadn't occurred to me that people wrote books. What Mr. McCracken made clear, though, was that people did write books, and since I was a person, I could write a book someday! It took me some years but I eventually got there.

How long have you been writing?
I started with very short stories in 3rd grade, when I was eight, and I'm now almost forty, so...thirty-two years?

Can you tell us a little about your book?
Dragon Pearl is a mash-up of Korean mythology and space opera, with animal shape-shifters and ghosts in a starfaring future. My heroine, Min, is a despised fox spirit, or gumiho, who runs away from home to clear the name of her beloved older brother, who is accused of deserting from the Space Forces to quest for the powerful Dragon Pearl. Min knows her brother would never have done any such thing, but she gets into a lot of scrapes in her quest to find out what happened to him. Along the way she makes friends with a goblin and a dragon, and has some close encounters with a dangerous tiger spirit.

How did you get the idea for writing Dragon Pearl? Were there any real life inspirations behind your writing?
Well, when Rick Riordan Presents sent out a call for manuscripts, I said to my agent that I bet that no one else was going to try to combine Korean mythology with space opera. I suspect I was right. (That being said, if there are Korean mythology space operas out there, please tell me about them so I can go read them!)

The inspiration was partly the folklore that I grew up reading when I was a child in South Korea, and the stories that I heard from my parents, and partly Star Trek and Star Wars. Some of the prejudices that Min encounters as a gumiho are based on real-life prejudice I've experienced, although I tried not to lean too heavily on that. And Min's initial hard circumstances came partly from stories of my dad's childhood, as he grew up poor. Other than that, I am afraid I have never met a fox spirit or tiger spirit...that I know of, anyway.

Who is your favorite character in the book and why? Or, which character was the most fun to write and why?
I have to say Min was the most fun even though as a parent she makes my hair stand straight up on end. She has an active sense of mischief and adventure, and she's learning both how to use her powers and that just because she has powers doesn't always mean they're the right solution. Also, she can shapeshift, which is a superpower I wouldn't mind having for myself!

How long did it take for you to finish writing the book?
Oh, gosh...about half a year, I think? I was interrupted in the middle because we were flooded out in 2016 (torrential rains, gotta love them) so it took longer than I would have liked.

Do you have a writing routine?
More or less. I get up, walk my cat (or more accurately, she walks me), maybe work on one of the languages I'm trying to learn (French, German, Welsh, Korean, and Japanese), brew myself a cup of tea, then set up in my study. For a long project like a novel, I usually write in Scrivener, although for a shorter project or to mix things up I sometimes write longhand with fountain pen. When I'm working in Scrivener, it gives me a running wordcount. So every 100 words that I write, I go to my bullet journal and write out the phrase, "100 words down, 1,900 words to f***ing go!" "200 words down, 1,800 words to f***ing go!" It's kind of aggro but it keeps me going? I generally aim for 2,000 words in a writing day. More than that and my brain seizes up.

What was the hardest part of writing?
The isolation, mainly. Writing is a job you can do by yourself, at least in the drafting stage, but even though I'm an introvert, humans are social creatures and I like seeing other human beings from time to time. I'm pretty good at sitting down and getting the words out, but the fact that I don't see colleagues in person with any regularity gets to me sometimes.

What’s the next step in your writing career?
I'm currently working on a fantasy novel for adults, working title Phoenix Extravagant, for Solaris Books. It's set in a world where magical paints imbue automata with qualities like courage or loyalty, and my hero/ine is a rebel artist who teams up with a rogue mechanical dragon against the evil empire! After that, I might noodle at a graphic novel, but we'll see what happens when I get there.

Any advice for future authors?
Writing has a learning curve, just like any other skill. The more you practice, the better you will get at it. Don't be afraid to tackle areas of the craft that you find difficult. Do you struggle with flashbacks or second person or romance subplots? Give them a try! The worst thing that can happen is that the writing doesn't work the way you hoped it would--and you'll learn something from the experience. I call this jumping off cliffs. In writing, the only way to learn to fly is by jumping off that cliff. And unlike in real life jumping off cliffs, you can't die of the experiment. Keep trying and never give up!

LET'S CHAT! HOW GOOD DOES THIS BOOK SOUND?  HAVE YOU READ ANY OF HIS PREVIOUS NOVELS?  LET ME KNOW!