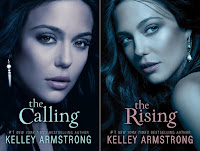 For a series where I haven’t read the first book in years, it was actually incredibly and surprisingly easy for me to fall into the story again. To be honest, I was a bit hesitant about picking up the rest of the books because from previous experiences, it would take me forever to fall back into the plot and characters. However, this was not the case for this series at all.

I really enjoyed reading about the characters and I actually liked Ash best even though I don’t think he showed up until the last book. To me, he was the most relatable as he’s a bit gruff on the outside but in reality, he was actually super considerate. He just doesn’t show it as much as other people do so he reminded me of me LOL. I also liked that even though he didn’t know Maya until much later on, he took on the brother role so quickly, it was adorable.

My least favorite part was actually the romance ❤️ especially between Maya, Daniel and Rafe. At first, I was all for Maya/Rafe because I thought they were a good match until the last book when the whole “Daniel is actually in love with you” was brought up. I honestly thought it was so unnecessary because to me, they were best friends. And that was it. Why bring up the romantic element just so there’s this love triangle? Of course, after it was brought up, I was just like oh….maybe.

Overall, this isn’t my favorite series from Kelly but I thought it was still quite interesting and I liked the whole element of the skin walkers and the other supernatural beings involved. I would recommend it if you enjoy these types of books.

WHAT ABOUT YOU? HAVE YOU READ THIS SERIES? WHAT DID YOU THINK? LET ME KNOW

I was pleasantly surprised by this book. This book didn’t seem like my cup of tea 🍵 and I only picked it up because I was trying to accomplish more of my Read Harder challenge. However, I fell in love with the Jonga family and how they tried to obtain that American dream. It also raised a lot of important points regarding immigration in the US that I wasn’t entirely aware of previously.

Truth be told, after I read this book, I also went to ask my Dad about the financial 💸situation back in 2007/2008 when the Lehman Brothers collapsed because at that time, I was still in high school and wasn’t aware of that particular situation as much. So this book definitely raised a lot of questions while reading it – I went to find out more about my own family’s situation during that time; I read up on the Lehman Brothers and how much of the book was historically accurate; and I even looked up some of the immigration laws. This book really made certain points stand out to me and I even found it fascinating.

The characters, specifically the Jonga family, was endearing to me. I loved how much hope they had initially with the “American Dream” and how much they were sacrificing just to obtain that green card. And as the book continued, all of the reality and what they faced in terms of legal issues and financial 💸 issues, it was as if I could physically feel what was going on for them. The author did such a fantastic job with bringing them all to life and really having the readers connect with them.

Overall, this book is amazing and I can see why I see everyone reading and raving about it. It’s that good!

WHAT ABOUT YOU? HAVE YOU READ THIS BOOK? DO YOU THINK IT WAS FAIR FOR WHAT HAPPENED AT THE END?

A Heart in a Body in the World by Deb Caletti
Published September 18, 2018
Summary on Goodreads

Review:
This was an enjoyable book and I can definitely say that I did not expect the ending at all. I was honestly expecting this book to veer a certain direction based on the clues that were provided but now that I am looking back, either results could have been plausible. So because the ending was unexpected for me, this made the book so much better in my opinion. I really dislike super predictable novels and this one did the unexpected.

I honestly did not like Annabelle that much. She just didn’t draw me in and to be put it bluntly, I found her quite dull 🙄. I didn’t understand why she was so likeable with her peers. I also found the romance ❤️ to be meh at best. This could have been a book that would have been better off without the romance aspect and instead, should have solely focused on Annabelle and her healing process.

Overall, I did like the book for the most part and even though I couldn’t exactly relate to Annabelle per se, I know for a fact that many others can and this is also a very relevant book in today’s world.

LET'S CHAT! HAVE YOU READ THIS BOOK? WERE YOU AS SURPRISED AS I WAS?

Why Not Me? by Mindy Kaling
Published September 15, 2015
Summary on Goodreads

I have to admit, I am starting to enjoy listening to celebrity memoirs on audiobook because they’re usually narrated by the celebrities themselves and because of that, the listening portion is quite entertaining as the celebrities imbue their emotions with each of their essays/chapters/stories. And with this book, there was no exception.

To be honest, I was never a fan of Mindy Kaling and truthfully, I’m still not. At least, not really. I just don’t care either way for her. I was never interested in any of her previous works, The Office, or in The Mindy Project so she was just there and I knew about her but that was it. So when I picked up this book, I was surprised to find how funny she actually was 😂. A lot of her humor is actually quite relatable and so I thoroughly enjoyed this book.

I loved how this book really showcased how much effort she put in when her career first started and how much work she had to do to become the person she is today. It was just gratifying for me to see how much she worked to reach that goal and all the challenges she faced. Overall, I definitely hold her in a higher regard now even though I’m still not the greatest fan.

ARE YOU A FAN OF MINDY KALING? HAVE YOU READ THIS BOOK? WHAT DID YOU THINK?