I am incredibly excited to share this author's guest post this week - his debut novel has been getting a lot of hype in the bookish world so I'm excited to have him on my blog today!  This week, I am featuring Adib Khorram, author of Darius the Great Is Not Okay. 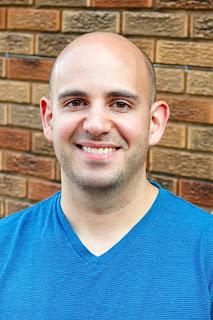 I was born and raised in Kansas City, Missouri. I received a Bachelor of Arts in Design & Technical Theater (Emphasis in Lighting Design) from Southern Illinois University, Edwardsville. Following that I attended Vancouver Film School and found out I didn't like making movies very much.

Now I live in Kansas City, where I write books. During the day I work as a graphic designer, videographer, projectionist, and more for live events in and around the Kansas City area and nationwide.

About Darius the Great Is Not Okay
Darius Kellner speaks better Klingon than Farsi, and he knows more about Hobbit social cues than Persian ones. He's a Fractional Persian--half, his mom's side--and his first-ever trip to Iran is about to change his life.

Darius has never really fit in at home in Portland, and he just knows things are going to be the same in Iran. His clinical depression doesn't exactly help matters, and trying to explain his medication to his grandparents only makes things harder. Then Darius meets Sohrab, the boy next door, and everything changes. Sohrab introduces Darius to all of his favorite things--mint syrup and the soccer field and a secret rooftop overlooking the city's skyline. He gets Darius an Iranian National Football Team jersey that makes him feel like a True Persian for the first time. And he understands that sometimes, friends don't have to talk. Sohrab calls him Darioush--the original Persian version of his name--and Darius has never felt more like himself than he does now that he's Darioush to Sohrab.


A number of people have asked me why I chose Portland as Darius’s home in the United States. Did I live there? Did I grow up there? Did I have roots?

Not really. I grew up (and still live) in Kansas City, Missouri; went to university in Edwardsville, Illinois (about 20 miles east of St. Louis); studied film in Vancouver, British Columbia. I have family in Vancouver that I visit all the time; friends in Seattle I visit just as often; and even a dad in California since he retired.

The idea for DARIUS THE GREAT IS NOT OKAY came to me while I was visiting my family in Vancouver for Nowruz. After the celebration, I took the shuttle down to visit my friend in Seattle. My friend and I both love tea (a love I passed on to Darius), and we’d had a plan to take a road trip from Seattle to Portland to visit one of our favorite tea places: Steven Smith Teamaker.

Something like 90% of my tea comes from two sources: Steven Smith Teamaker in Portland, and Harney & Sons in Connecticut and New York. So I was extremely excited to visit Smith Tea’s store and have a good cup of tea in their beautiful tasting room.

Unfortunately, a few days before our road trip, we learned that Steven Smith, the founder of Smith Teamaker, had passed away. I’d had the chance to meet Steven at the Northwest Tea Festival, and I was struck by his generosity and knowledge and friendliness. His death was a loss for the tea world—and definitely added a twinge of sadness to our trip, though it was still a beautiful experience.

So when it came time to write about Darius, that trip to Portland was foremost on my mind, and it felt like such a natural fit. So I did my research—including whether or not people in Portland would recognize what truck nuts are—and got the chance to visit a few more times. And I feel like Darius couldn’t really have lived anywhere else.

He just fits there.


LET'S CHAT! HAVE YOU READ HIS BOOK? WHAT DID YOU THINK ABOUT IT AND DID THIS GUEST POST HELP YOU UNDERSTAND DARIUS A BIT MORE?