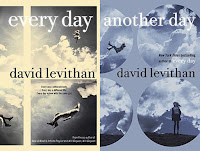 I found the first book to be quite interesting with such a fascinating plot; however, my only question really is “did the author actually meant to have a series because first of all, the time lapse between the first and second is quite some time and second of all, the second book is pretty much the same as the first book – just in a different perspective?”  I know there’s a third book which, admittedly, I still want to read mainly because I just want to know what happens at the end since both books definitely leave the readers at major cliffhangers.

Honestly, it was the premise that drew me in at the beginning.  I mean, it’s such a unique concept of hopping around in bodies for only one day at a time.  It’s kind of like the body-snatcher but in a more tame form – none of that devious and evil alien stuff.  The first book was really quite fun for me to read – I liked A’s character and it was easy to see his/her struggles as he/she faced a new body with new challenges every single day.  The one thing I guess I can’t fully comprehend is his/her devotion to Rhiannon because he/she literally only met her that one day yet ended up falling in love with her.  It was also something that Rhiannon struggled with understanding as well because most of us who form relationships do so after knowing the other for a certain amount of time.  However, the one thing I do understand is that because his/her form of relationships are made in one day (they have to be), I guess it does make sense.  It’s just hard for me to comprehend it.  It was also interesting to see how A reacted to being in a female or male body and how nonchalant he/she was about it compared to other people.

Not only were the characters interesting but I also loved the whole mystery element as well.  I didn’t think there was going to be one – I had assumed that it was going to be a relatively straightforward YA romance novel with a small fantasy twist to it but it’s not as simple as that.  It definitely gave the book more depth and allowed there to be a third book.

In regards to the second book, I honestly didn’t really see point in it.  It was essentially the same book as the first one but in Rhiannon’s perspective.  And yes it was different because you got the other POV but a lot of the conversations and email exchanges were exactly the same.  It was to the point that I ended up skimming a lot of paragraphs – sometimes even pages – because I was literally reading the same thing, word for word.  So while it was unique to read about the other person but at the same time, I thought that the author could have done things differently and maybe even combined the two books so the overlap wouldn’t really be there.  Because of that, I felt that it was more of a struggle for me to finish the second book than the first one.

Overall I’m still interested in finding out what finally happens in the final book.  I’m really curious to see what both A and Rhiannon will do and how their happily ever after will play out.