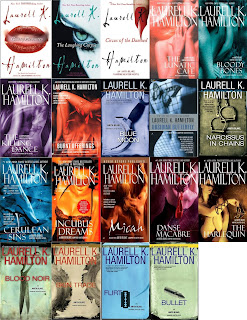 Oh mannnn, what to say about Anita Blake?  So many things to say yet so little time to say it. Plus, I don’t want to write like a 500 page essay about the pros and cons about this series.  I remember reading this series back when I was in high school, many, many years ago, and I caught up to, I think the most recent at that time, which was Skin Trade (I think, not 100% sure) and I was still engrossed enough to continue with the series.  I told myself to come back to it later and finish the series.  8 years later, I finally have the chance to come back to it and I’m not sure what the fuck I was thinking at that time.

Okay, the first, I want to say 8, books were great.  I enjoyed reading about Anita Blake and even enjoyed the love triangle between Jean Claude and Richard.  I also liked Nathanial a lot as well as Micah so I was fine with those four men.  Even though I think that’s 3 too many but, as a female, I can appreciate having many men woo and love me.  However, I think there comes a time when you need to draw a line between a few and way too fucking many.  I don’t think Laurell can draw that line.  Anita, by the end of Bullet, had at least TWELVE men plus others that she slept with on a “pinch” or because she had some sort of “emergency.”

The biggest issue I had with this book isn’t the number of men, but the fact that Anita went from a relatively prude woman (I mean, in the first book she wasn’t with anyone at all and by around book 3 or 4, she was still relatively shy about men and sex and was essentially only with Richard and/or Jean Claude.) to someone who was willing to just sleep with almost anyone even females. It was like she lost her morals or something.

Another thing I really disliked was the fact that she became so needy of these men.  She used to be relatively strong, mentally and physically, when she was doing police and investigative work as well as raising the dead.  And then all of the sudden, due to the “ardeur”, she became a sex fiend.  She had to have sex or die.  And even other books that had succubus in it was never like this.  Since she was “forced” to have sex with men, she became very, very dependent on the men around her.  It was like she could never be without them and couldn’t be just herself anymore.

The one thing that I kept thinking after around book 10 was the fact that I’m 99% sure that these books are a direct link to the author’s own issues.  She even mentioned it somewhere either on her website or on Goodreads or something where she herself was often in group sex/orgys and that there was nothing wrong with it.  I mean, that’s your own prerogative but I think there comes a time when you need to remove your fictional characters from your own personal problems.  It was like she needed some reassurance that it was fine to be so out there like that so she put it in her book.  It was honestly to the point that each book had about 80% sex scenes.  There was no real content anymore and no real action other than sex and more sex.  Also I’m pretty sure that even Laurell herself got tired of writing some parts of the book because she kept repeating herself in explanations and whatnot.


Honestly, I kept with the books mainly because I wanted to see what the end result was between her, Jean Claude, Richard, Micah and Nathaniel.  These were the core men that I was actually interested in.  The rest could just disappear for all I care.  However, by book 19, I can see that there was no end in sight for the sex scenes and how she became so powerful with both mystical stuff and with her magical vayjay.  Seriously, I just don’t understand how men can sleep with her and then suddenly be in love with her.  Like WTF.  Plus I’m just tired of reading about sex over and over again in different situations and with different men.  It’s like a rotating board.  Also, it is not at all realistic to be like “omg, Anita, you’re so tight.”  Girl, you’re probably wider and looser than any woman I know.  You have TWELVE men you’re constantly sleeping with and they’re all “very well-endowed”plus all the other men you sleep with once or twice.  There is NO FUCKING WAY you’re “so tight” after all that.  Please.  Laurell, be fucking realistic here.