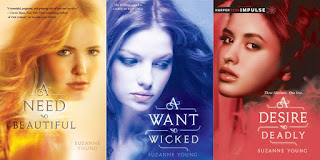 I think this was one of those series where the author could have been better off with leaving it after the first book.  I’m not saying that the second book wasn’t good or that the novella didn’t wrap things up – both were true.  However, I definitely felt that the second book opened up a can of worms that never answered any questions and only left with more confusion.  The first book, while a bittersweet ending, could have been the ultimate ending despite the fact that it didn’t answer things 100% which the novella did.  But it just wasn’t super necessary, if that makes any sense.

Book 1 felt like it was just the precursor where Charlotte was just trying to figure out what was going on and then had to face the ultimate decision – save herself and go into darkness or sacrifice herself for the sake of everyone else.  Obviously we all know which decision she took (duh!).  The one thing I would say about this book is that I felt that things happened in a blur from when Charlotte started to get the Need to when she had to face the ultimate decision.  I felt that she didn’t have enough time to really process everything and then she suddenly had to give up her life.

For book 2, it definitely didn’t focus as much on the Need but more on the Shadows and how to combat them.  I was also a little surprised about Lucy’s and Abe’s arrival since I thought this trilogy would basically be a showdown between Charlotte and Onika but clearly that wasn’t the case at all.  My biggest qualm about this book is that it didn’t answer anything especially the most important question – how come she came back in a different life/body?  What made her different from all of the other Forgottens?  And how come Harlin, Charlotte’s boyfriend in book 1, somehow found her so quickly and was somehow still the same age?  That was another biggie for me – okay, I can move forward with Charlotte’s reincarnation but how the fuck did Harlin still look like he belonged in high school despite the fact that more than a year passed between each reincarnation?  Not to mention, each book was over a course of a few weeks/months.  And in the distant future, if she kept reincarnating, how can Harlin fit in as a romantic partner if he’s aging as a regular person but she’s still coming back as if she was still 17 all over again?  It just made no sense to me.

Even though Charlotte’s character/body changed with each book but I think that her true personality still remained the same and it was evident as I read the series.  I liked how the author made her consistent throughout the series despite her having different lives and different bodies.  I thought that was nice.  Harlin, her boyfriend, also remained consistent though he did lose some of that happiness from the first book which is obviously understandable since he basically witnessed his girlfriend basically exploding into lights.  However, he remained true and steadfast and still loved her with all of his heart.  While I found that admirable and romantic, the cynical side of me simply cannot believe it.  Remember, they’re both teenagers yet somehow after witnessing himself that his girlfriend had passed on and yet still somehow remained true to her.  The author didn’t talk about whether or not he met other girls along the way or whatever.  I don’t know…I just can’t imagine that.


Overall, the books were good but there was definitely room for improvement.  I wish the author answered a few more questions about the logistics of some of the plots but overall, it was decent.