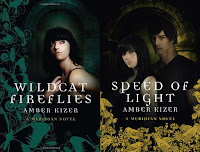 I’m actually quite impressed with myself for finishing the last two books in the series.  Mainly because after I read the first one, I couldn’t find the second two for quite some time that I almost gave up but then I moved to NYC and voila, the library had them.  Also because I wasn’t 100% in love with the first one that it would’ve been simple for me to simply disregard the rest of the series but somehow I never got around to taking them off my TBR list on Goodreads so…here we are today lol.

I read the first book years ago so I don’t at all remember what it was about so the second book was mostly for me to refresh my memory and reacquaint myself with the characters specifically Meridian and Tens.  It was also interesting for me to read about how much in love they are yet they talked about how when they first met, they hated each other and couldn’t stand each other whatsoever.  It was quite difficult for me to believe that since they’re always stuck at the hip with each other and they’re usually all over each other too.

However, that being said, I can’t say that I’m a fan of any of the characters.  Meridian was very uptight at times and she was quite bossy.  Tens always succumbed to Meridian’s whims so even though he was a good guy overall, sometimes I felt that he didn’t have a strong personality.  As for the other characters such as Juliet who didn’t really become super important aka have her own POV chapters, I guess they were adequate but after a while, I felt like Tens and Meridian kept collecting people that by the third book, it was hard to keep track of everyone other than the big names like Rumi and Juliet.  And for Juliet, I was definitely not a fan of her.  I liked her a lot more in the second book when she was still more of a secondary character but after she got saved and stuff, she became so whiney and unresponsive.  She felt that Meridian and Tens were too bossy and Tens were too overbearing.  Plus she was always so secretive and felt that everything was on her shoulders even though it really wasn’t.  I just felt that there were a lot of situations that could have been avoided if Juliet had spoken up and shared.

Other than the lack of interest in the characters on my part, the plot was okay.  There were a few times when I was a little confused because there was just too much going on and all the different terminologies for Nocti and Fenestra was getting to me.  It was like the author wanted to just have about 10 different names for the same thing.  Not only that but there were always new groups of people who came into play and then Meridian and Tens would become super suspicious about them and what they want.

I thought the ending was decent though; however, I just went back on Goodreads and found out that there’s apparently a fourth book?  I thought the third was the last in the series…And another thing I dislike about this series is that each book is years apart.  I mean, the third book came out in 2012.  It’s now 2017 and there’s supposed to be a fourth book?  Me thinks not.  As in I doubt I’ll pick it up.