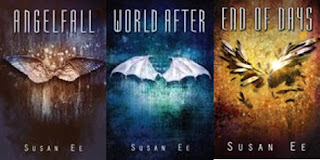 Review:
This is probably one of the best dystopian trilogy I’ve read in a while.  This was also my first audiobook trilogy so that was very interesting.  It definitely gave more depth to the characters and action and I actually listened to every single word.  I have this terrible habit of skimming when I read a book so listening to it automatically fixes that.

Penryn was an awesome female character.  I absolutely adored her.  She was brave and loyal to a fault.  It was interesting to see how this seemingly random family trying to survive in the first book basically became the family to fear and inspire in the last book.  All the members of her family had their own natural gifts or talents that were given to them that equipped them well in the fight against angels.  I loved how Penryn only thought of her family and their safety and how everything was black and white in the first book but then realized as the story progressed that not everything is as easy as that.  There are tons of shades of gray as well.


I loved the character development in the book.  Everything was even paced and seemed realistic.  The other main character, Raffe, the archangel, also known as Raphael grew a lot in the books.  For him, it was also black and white in the beginning.  He viewed humans as monkeys and considered them to be dirty and gross.  However, as the books progressed, he started to view them with respect and understood what his Watchers understood a millennium ago – that while the angels were perfect in every way, the human’s imperfections and flaws were what made them perfect and loved in God’s eyes.

The relationship between Penryn and Raffe was also delicious to listen to.  It was clear from the start that they were only working together as a means to an end but as they grew closer together, they learned to trust each other more and realize that angels and humans aren’t so different after all.  It was great to see how their relationship developed and deepened from something insignificant like a crush (so many other YA books claim that it’s love but in reality, it’s just a crush) to something more substantial.

The other supporting characters were important in keeping the book great.  Penryn’s sister, Paige, played a huge part especially in the third book.  Penryn’s mother also became a huge asset and it was hilarious to hear other people commenting to Penryn how her mother was so fierce and how even the angels viewed her with respect.  The twins, Dee and Dum, were also a joy to read about.  They definitely brought a comic relief to the books while maintaining a seriousness to it.  Obadiah, the resistance leader, also became important as the book progressed and I was saddened to hear what happened at the end.

I was quite surprised with the last stand that the humans took with the angels and honestly did not expect it.  It definitely made sense in retrospect but it was just so out of the box that it was awesome.  It made the ending just so much better and sweeter.  And when Raffe and Penryn declared their love to each other, I was smiling all over.  It was so cute.

Overall, absolutely great series.  I’m really hoping they can make this into a movie since dystopian themes seem to be the main genre these days in the theater.  Plus, it’s a lot better than Divergent anyways.